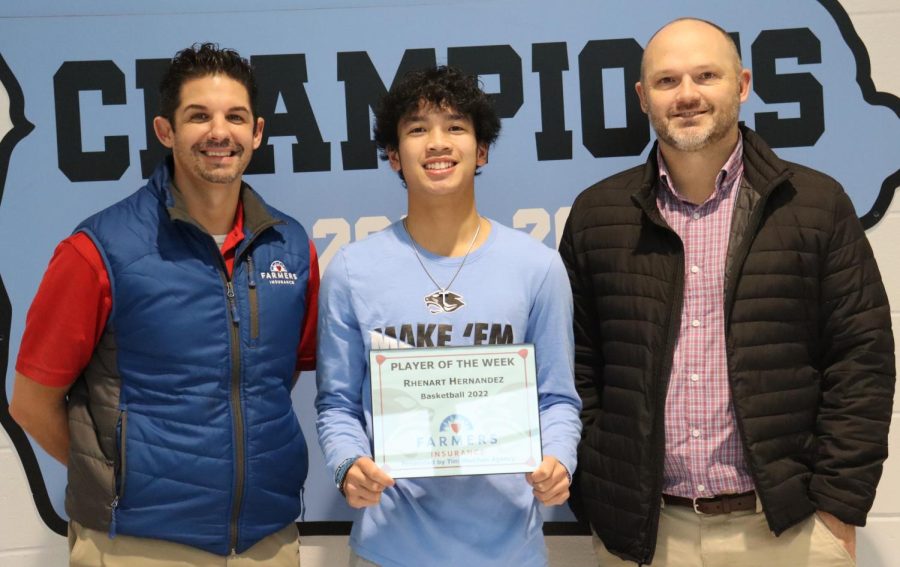 Junior Rhenart Hernandez has been selected as the fourth Farmers Insurance Player of the Week for the winter sports season. Hernandez was chosen by head coach Joshua Reeves for his work both offensively and defensively.

Tim Monihan and Farmers Insurance recognize junior basketball player Rhenart Hernandez as the fourth Player of the Week for the 2022 winter sports season.

Varsity boys basketball coach Joshua Reeves says Hernandez is a team leader on both the offensive and defensive ends.

“Rhenart has averaged 14.5 points a game, and been one of our team leaders offensively and defensively,” Reeves said.  “He’s just a bulldog out there. He plays hard, he is aggressive, and he does everything we need him to do to be a leader on the court.”

Varsity boys basketball is coming off of a pair of tough losses last weekend. The Panthers fell to Cedar Grove 63-52 Friday night. The following day, Starr’s Mill fought back from being down 20 points to Northgate. Despite the second half comeback, the Vikings held on for a 59-55 win.

The Panthers have faced tough competition to begin the season and prepare for region play after the holiday break.

This Friday, Starr’s Mill hosts McIntosh at 7:30 p.m. in the Panther Pit. The team then travels to Florida for a holiday tournament December 27-29.