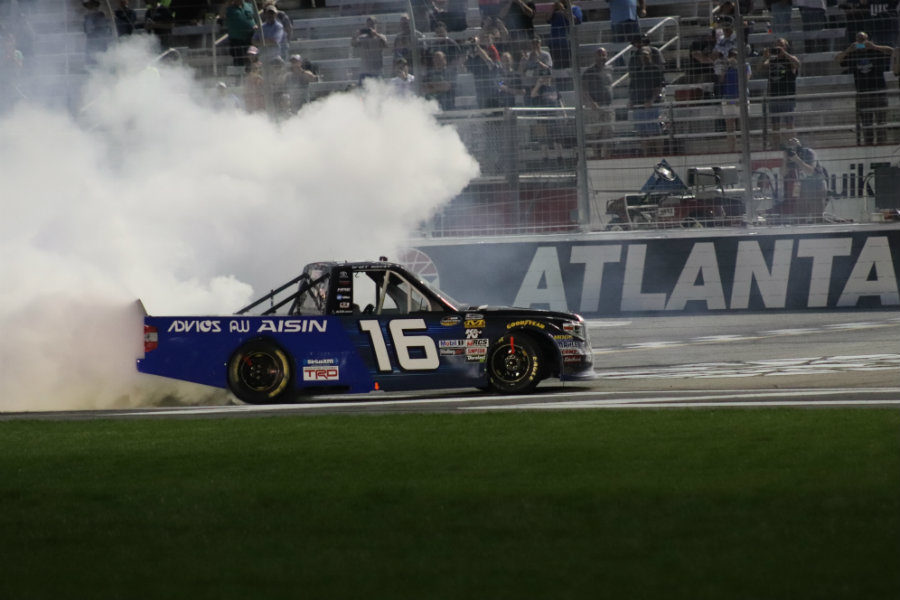 Brett Moffitt, in the No. 16 AISIN Toyota, finished first after leading only two laps the entire race. With the win, Moffitt and his team, Hattori Racing Enterprises, locked themselves into the NCWTS playoffs.

A race led primarily by top qualifier Kyle Busch ended in victory for Brett Moffitt in the No. 16 AISIN Toyota for Hattori Racing Enterprises. Moffitt took the win after leading only the final two laps in a race that ended under NASCAR’s overtime rule.

“I knew we were going to launch harder with our JGR motor…[W]e were able to push Kyle to the lead on one [restart]…I tried to give [Snider] enough space where he could spin his tires [and] I could get to the bottom,” Moffitt said of the late-race restart that propelled him to his second career NASCAR Camping World Truck Series victory.

As the race turned into the final few laps, the caution flag flew after contact between the No. 33 driven by Josh Reaume and the No. 25 of Dalton Sargeant.  Busch’s chances of victory disappeared after leaving his pit stall before all the lugnuts were tight on the left rear. His tire fell off in one turn, forcing him to return to the pits. The mishap resulted in a 21st place finish for the driver who led half the laps in the race.

“It is not everyday you get a truck like that,” Sauter said. “I am going to beat myself up for week on this one because I will sit there say, ‘What if I did this, or what if I done that?’”

“I felt like we had a really fast Safelite Repair Autoglass really all day and all weekend including yesterday,” Gragson said. “It was pretty hectic there in the end. I made a mistake on pit road that cost us a position or two, but everything happens for a reason I guess.”

Only four laps into the race, Norm Benning caused the first caution due to a vibration in his No. 6 Zomongo/H&H Transport Chevrolet. A battle for stage points occurred at the tail end of stage one between Busch in the No. 4 Cessna Toyota and Rhodes of the No. 41 Alpha Energy Solutions/Ride TV Ford. Gragson finished first after leading all 40 laps in Stage 1. Crafton ended second with Busch in third, Moffitt in fourth, and Little in fifth.

Stage 2 started with Crafton, Sauter, Busch, Moffitt, and Gragson in the top five. Halfway through the relatively calm second stage the caution was called due to debris on the track. While Gragson began to fade as the stage continued, Sauter steadily gained momentum and finished in second, with Busch maintaining a steady lead. Busch, Sauter, Moffitt, Crafton, and Gragson finished in the top five for Stage 2.

“We do not have the biggest shop or the biggest truck, but we definitely have the right damn people,” Moffitt said. “[The crew] did a great job. I knew we would be successful, but I did not think it would be this early [in the season].”

Busch dominated the previous stage and continued that trend with ease early into the third and final stage. Sauter desperately attempted to catch up with Busch, but failed in his endeavors. With only 20 laps left in the race, Busch led with Sauter in second, Moffitt in third, Rhodes in fourth, and Crafton in fifth.

The race win seemed well in-hand for Busch until a wreck occurred with only six laps left as Reaume and Sargeant tangled on the backstretch.

“The tires are our biggest problem and concern for me, because [when] we keep the tire life on it, we are one of the best trucks here,” Gragson said.

The caution forced the leaders to pit with everyone taking four tires, except for Myatt Snider in the No. 13 Liberty Tax Ford. It was then that the pit error occurred for Busch, costing him the win.

The top Georgia finisher was Dawsonville’s Spencer Davis in the No. 51 JBL/Sirius XM Toyota for Kyle Busch Motorsports as he placed 13th. Korbin Forrister, driver of the No. 7 for All Out Motorsports, came home with 16th place while finishing on the lead lap. Austin Hill of the No. 02 United Rentals Chevrolet finished in the top 20 as well.