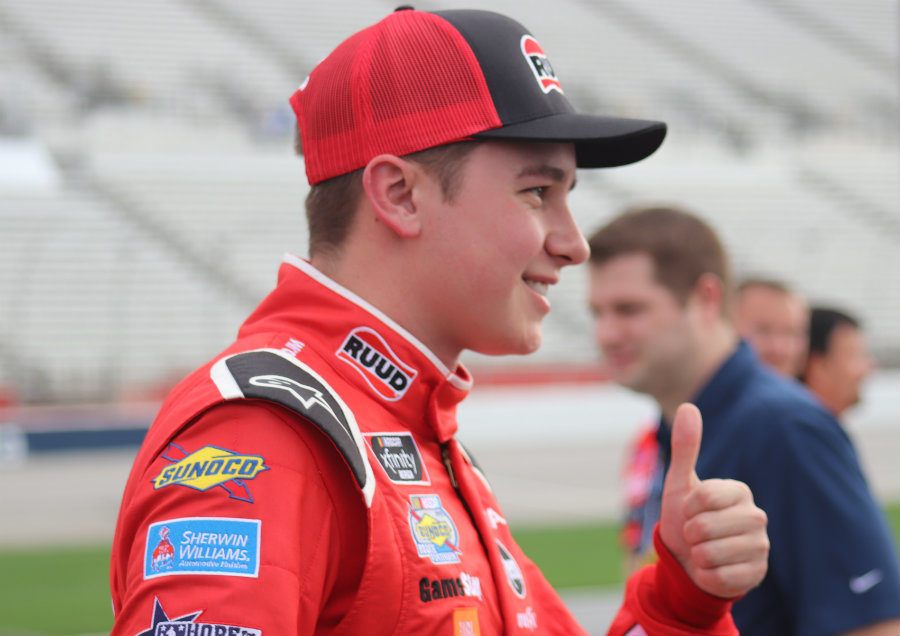 Xfinity Series rookie Christopher Bell gives a thumbs up after finishing qualifying with the fastest lap time. Bell has maintained some of the top speeds throughout both practices and qualifying.

Xfinity Series rookie Christopher Bell, who showed consistent speed throughout both practice sessions yesterday, captured the top starting position for this afternoon’s Rinnai 250 at Atlanta Motor Speedway.  The driver of the No. 20 Ruud Toyota for Joe Gibbs Racing finished qualifying with a lap time of 30.600 seconds (181.176 mph).

Joey Logano of the No. 22 for Team Penske finished qualifying with the second fastest lap time of 30.630, only 0.03 seconds behind Bell. John Hunter Nemechek, in the No. 42 for Chip Ganassi Racing, finished qualifying with the third fastest time of 30.669 seconds. Cole Custer of the No. 00 for Stewart-Haas Racing narrowly edged Kevin Harvick, one of three MENCS drivers pulling double-duty this weekend, by 0.001 seconds for the fourth starting spot.

Brandon Jones, driver of the No. 19 for Joe Gibbs Racing, finished seventh in qualifying. Last weekend’s Daytona winner Tyler Reddick of the No. 9 Chevrolet finished 11th. Justin Allgaier of the No. 7 for JR Motorsports will start 17th in the race later today after failing to make the last round of qualifying.

Garrett Smithley, in the No. 15 for JD Motorsports, finished 32nd in qualifying. He did not run in yesterday’s first practice and finished 28th in the final practice.

Ryan Sieg, driver of the No. 39 for RSS Racing, finished 25th, missing the second round of qualifying by 0.152 seconds.

Mike Harmon in the No. 74 Shadow Warriors Project Chevrolet for Mike Harmon Racing and  Josh Bilicki in the No. 45 Prevagen Toyota for J.P. Motorsports failed to post a time fast enough for today’s race.

NASCAR’s only double-header of the season begins this afternoon with the Xfinity Series Rinnai 250. The green flag is set to fly at approximately 2 p.m.