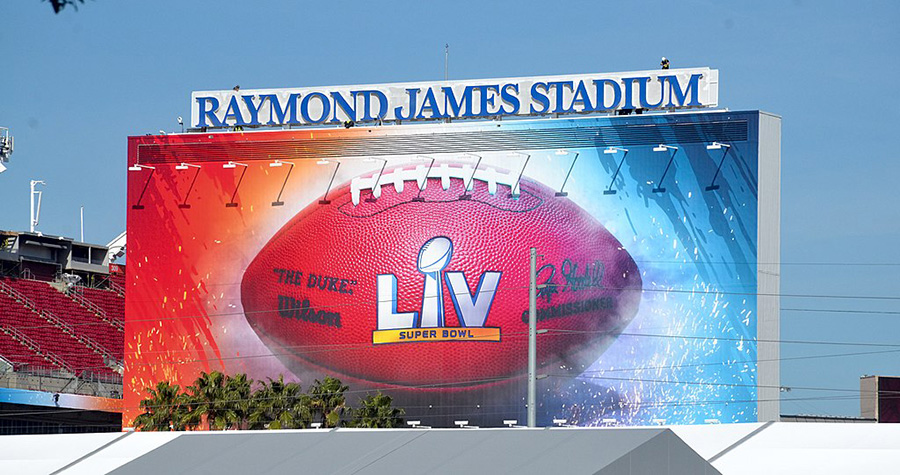 Raymond James Stadium in Tampa Bay, Florida, decorated for Super Bowl LV. The Kansas City Chiefs and the Tampa Bay Buccaneers will compete for the title of Super Bowl Champion. The reigning champion Chiefs have an extraordinarily great offense that has helped them dominate opponents. On the other hand, the Buccaneers have formed their own identity with several pieces that have made them an immense threat. Find out who wins Super Bowl LV as the big game commences at 6:30 p.m. on Feb. 7. (Photo via Wikimedia Commons (Doctorindy) under CC-BYSA 4.0)

Raymond James Stadium in Tampa Bay, Florida, decorated for Super Bowl LV. The Kansas City Chiefs and the Tampa Bay Buccaneers will compete for the title of Super Bowl Champion. The reigning champion Chiefs have an extraordinarily great offense that has helped them dominate opponents. On the other hand, the Buccaneers have formed their own identity with several pieces that have made them an immense threat. Find out who wins Super Bowl LV as the big game commences at 6:30 p.m. on Feb. 7.

The Chiefs had a hot start coming off of the momentum of last season’s Super Bowl win, so it was no surprise to see them in the running for another championship. Last year they showed that a young team with some experience could hold with older, more experienced teams. Once again this year they were a force to be reckoned with.

Kansas City has been dominant all season, and especially the Kansas City offense. The Chiefs have been a steamroller when it comes to moving the ball down the field led by the young phenomenon Patrick Mahomes and veteran tight end Travis Kelce.

Mahomes has proven himself to be one of the most elite quarterbacks in the NFL and is looking to add another trophy to his case to build onto his stellar young career. He has led a powerful offense with speedy receivers like Tyreek Hill and Mecole Hardman, backed up with power from Travis Kelce and young running back Clyde Edwards-Helaire.

Edwards-Helaire came into the league as running back drafted in the first round that few people expected. The elusive back out of LSU came out of the gates ready to play, and while they didn’t use him much during the regular season, the young rookie has proved himself in the playoffs with the help of a veteran presence in Le’Veon Bell.

This powerhouse of an offense not only led in passing yards, but led the whole league in total yards of offense. Mahomes, being fourth in the league in touchdowns, only threw 6 interceptions all year. On average, the Chiefs’ offense scored 30 points per game.

The Kansas City defense is led by defensive end Chris Jones and safety Tyrann Mathieu. Their defense has played just about average, right in the middle of yards given up in the league.

Although they have had trouble bringing down the quarterback, ranking below average in sacks, that didn’t stop them from forcing turnovers. The Kansas City secondary had the fifth most interceptions in the league, shutting down the passing game for many teams, including the Cleveland Browns and Buffalo Bills.

Head coach Andy Reid finally shed off a 20-year legacy of failure with his first Super Bowl victory last year. Now he is looking to repeat and add on to his resume as a hall of fame coach.

On the other sideline, the Buccaneers have a strong passing game and a moderate run game. If the Chiefs can slow down Tom Brady, the Kansas City offense will have a good chance to overtake the Buccaneers without much of a struggle.

For the Chiefs, their biggest problem is going to be slowing down the passing game with threats like Mike Evans and Rob Gronkowski. They must force a Buccaneers into the run game. Tampa Bay ranked second worst in the league during the regular season in rushing.

With Tom Brady contained, Kansas City is looking forward to adding to the trophy shelf with a bright future still ahead of them.

Going into the 2021 NFL Playoffs, the Tampa Bay Buccaneers were boom or bust. They had the potential to take down any team in their way but they also struggled with consistency issues throughout the entire season. This postseason the Buccaneers are the wild card team turned NFC champions.

Tampa Bay got to this point by bolstering an offense with powerful weapons, a young, yet feisty defense, and a strong coaching core to keep the team together. Their roster is filled with new talent and old faces that all gel together. Most notably is a name everybody knows: Tom Brady.

I despise seeing [Tom Brady] continue to reign over the league, but I respect him for all that he has been able to accomplish.”

I thought his career was done after last season. He was visibly on the decline in his final season with the New England Patriots. I thought he was going to finally reach the end of his career in Tampa Bay. I was fooled. He led the Bucs offense while seemingly finding the fountain of youth at age 43.

Now he is chasing not just football immortality, specifically, but sports immortality. With a seventh ring, he will be put into the pantheon of sports legends with Wayne Gretzky, Babe Ruth, and Michael Jordan. I despise seeing him continue to reign over the league, but I respect him for all that he has been able to accomplish.

His supporting cast may be the best he has ever had. In the backfield with him is Leonard Fournette and Ronald Jones II. Both have bolstered the running game and added a solid second dimension to the passing game.

The receiving core is a game of picking your poison. You have Mike Evans, one of the top receivers in the league, Chris Godwin, who has emerged as one of the best number two receivers in the league, and tight end Rob Gronkowski, who is not what he used to be but he is still a reliable weapon. There are also other unsung weapons Scotty Miller, and Antonio Brown in his return to the league.

Despite being salty due to how Brown burned bridges in three different cities, he seems in better health and set on turning his career around. This offense has brought this team in big numbers, ranking seventh in yards and third in points scored.

On the defensive side of the ball, Tampa Bay has weapons, new and old, from top to bottom. This group ranked in at eighth for points allowed and sixth for yards given up. Their front four is filled with dangerous veterans, including defensive ends Jason Pierre-Paul and Ndamukong Suh.

Behind the d-line is another layer to their dangerous pass rush, most notably outside linebacker Shaquil Barrett, a dangerous monster who has been racking up sacks. There are also inside linebackers Lavonte David and Devin White who help round out a phenomenal front seven. Their secondary is no joke, helping the defense rack up 15 interceptions on the season.

At the top there is head coach Bruce Arians. While he won rings as an assistant coach, he has yet to win a ring as a head coach. Even with the great Arizona teams he coached in the early 2010s, this is his first time at the big game as a head coach. The work he did to take the Buccaneers from forgettable to a Super Bowl contender is astounding.

Throughout this team are several ambitious players all united for the same goal. Early in the season, Brady and Arians clashed, but ultimately reconciled as they grew an understanding for each other and their goals as the season went on. The whole team ended up coming together and creating a threatening force with a lot to root for.

Whether it be Brady padding his legacy, Arians getting his first ring as head coach, or even Brown redeeming his past errors, this is a team that is incredibly interesting as the underdog to the reigning Super Bowl champions.

Kansas City has an unrealistically fantastic offense, but their defense is lacking enough for Tampa Bay to be able to keep pace. Especially with both of their starting tackles questionable to play, the Buccaneer pass rush is going to do them wonders in this game.

The Tampa Bay Buccaneers are going to have every ounce of fire power to take the Lombardi Trophy and ride high this Sunday.