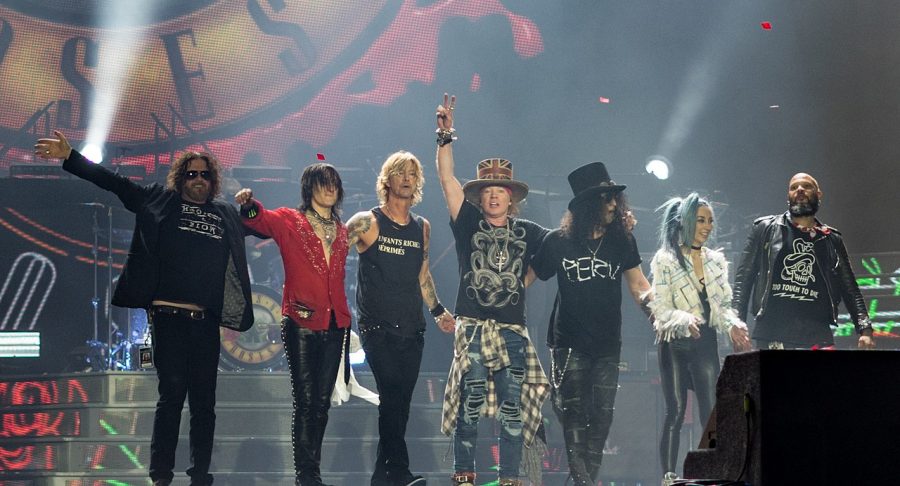 All members of Guns N’ Roses stand on stage after a concert. Most known for “Sweet Child O’ Mine,” the band is known for their distinct style of aggressive rock-and-roll.

Guns N’ Roses has a very distinct style. Teetering on the edge of heavy metal, the band is known for their raw and aggressive rendering of rock-and-roll.

Their most popular song has to be “Sweet Child O’ Mine,” ranking in at over a billion listens on Spotify. Other notable songs include “Paradise City,” “November Rain,” and “Welcome to the Jungle.”

Axl Rose’s voice is key to Guns N’ Roses’ sound. His raw, almost nasally voice brings the rawness of the band to fruition. Characterized by his distorted high octave vocals, Axl Rose has  a huge vocal range that contributes to the band’s distinctive aggressive and unique sound.

This huge vocal range and raw voice is what makes Greta Van Fleet so similar to Guns N’ Roses. Axl Rose’s voice and Josh Kiszka’s voice share many similarities, including those high octave vocals which can be heard in “Black Smoke Rising” by Greta Van Fleet.

Kiska’s vocals in “Black Smoke Rising” embody that rawness that brings passion to Greta Van Fleet, much like how Rose’s vocals do.

Growing up with a dad that was all about rock-and-roll and classic rock bands, I practically grew up on Guns N’ Roses. They have harbored a sense of nostalgia for me, hidden in a few of their songs. My most favorite has to be “Sweet Child O’ Mine” or “Paradise City.” Sure they are the band’s most popular songs but the childhood memories attached to them have made the songs something special to me.