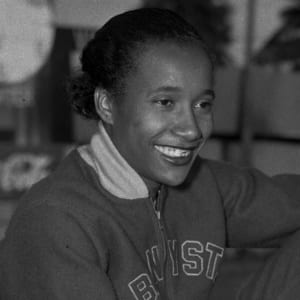 Coachman made history in 1948 at the London Olympic games as a track and field athlete winning a gold medal as an African American woman. Coachman broke the record height of the long jump at 5 feet and 6 ⅛ inches.

Coachman was born on November 9, 1923, in Albany, Georgia, the oldest of ten children. She grew up in deep segregation, where she was often denied opportunities to train or compete in organized sporting events. Instead, she improvised her training by running barefoot in fields and on dirt roads, as well as using old equipment to improve her high jump.

In high school, Coachman attended Madison High School where the boys track coach Harry E. Lash helped train her. She caught the attention of the athletic department at the Tuskegee Institute in Tuskegee, Alabama, which offered Coachman a scholarship.

Her parents originally were not in favor of her pursuing her athletic dreams. Though before she ever stepped foot on the institute’s campus she ended up breaking the high school and college high jump records barefoot in the Amateur Athlete Union National Championships.

In 1946, she enrolled in Albany State College. That same year she ended up becoming National champion in 50 and 100-meter races, as well the 400-meter race and high jump. Due to World War ll, she was unable to attend the Olympics in 1940 and 1944.

During the Olympics in 1948, despite nursing a back injury, she set a record jump of 5 feet and 6 ⅛  inches, making her the first African American woman to win a gold medal.  Her medal was presented by King George VI.

Following the Olympics, she graduated from the University of Albany and formally retired from athletic competitions though her stardom remained. In 1952, the Coca-Cola Company asked Coachman to become a spokesperson for the company, making her the first African American to earn an endorsement deal.

Later on in her life, she founded the Alice Coachman Track and Field Foundation to help support young athletes and provide assistance to retired Olympic veterans. Coachman has been inducted into the National Track and Field Hall of Fame and the U.S. Olympic Hall of Fame. During the 1996 summer Olympics in Atlanta, Georgia, she was honored as one of the 100 greatest Olympians in history.