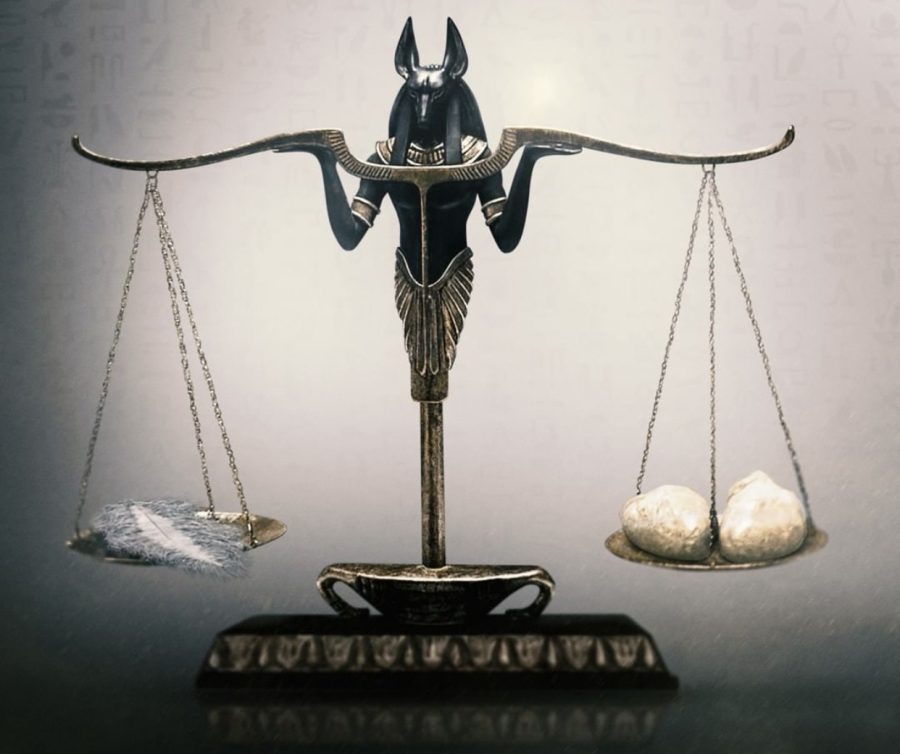 The scales that weigh Marc and Steven’s separate hearts. In this week’s episode of “Moon Knight,” Steven and Marc face off against their own memories and the unspoken truths that haunt them. With a heart-wrenching twist, this episode prepares the audience for next week’s finale.

The internet has agreed that it really seems as though Marvel Studios’ theme for Phase Four is trauma because this episode really makes it hard to believe that every superhero is not mentally ill.

In this episode, the audience finally gets the backstory they have been wanting and some resolution to the growing tension between Marc and Steven.

Starting the episode with Taweret, the boat to the field of reeds, and the unbalanced hearts really pulls the audience in. It sets the tone of danger and the race against time that makes the audience and the characters feel the tension grow.

While Steven and Marc fight about revealing the “sins” of Marc’s past, Marc’s consciousness flashes between the real afterlife, and the inside of their head where they talk to Arthur Harrow as “Dr. Harrow.”

This character serves to help both Marc and Steven overcome some of their internal blocks that prevent them from getting to either the field of reeds or back to the living world. For Marc this means opening up to Steven about his past, the creation of the other alter, and his journey to becoming Moon Knight. For Steven, it means accepting that he is an alter and not the host as previously thought, and accepting the death of his beloved mother.

While the two characters struggle to open up to each other, they also explore Marc’s backstory. The audience meets Marc’s younger sibling Randall. The brothers love to explore and pretend to be their favorite movie characters, Dr. Steven Grant and Rosser. When Randall tragically drowns in a cave with Marc, their mother turns on him and starts to blame Marc for his death.

[T]he present-day Marc grabs Steven and pulls him out of the room, saying that Steven was not ‘meant’ to see that.”

As the audience watches Marc’s backstory, so does Steven. This is where Steven begins to realize he is an alter for Marc. It finally becomes clear when the audience sees a young Marc, who is being terrorized by his mother behind a closed door, switch into Steven who seems blissfully unaware of the hateful things being shouted at him.

When their mother finally gets through the door and grabs a belt intending to beat him with it, the present-day Marc grabs Steven and pulls him out of the room, saying that Steven was not “meant” to see that.

From there the audience and Steven watch Marc become Moon Knight, witness the loss of his mother, and watch how Marc and Steven’s lives start to merge together. It is also unclear whether this episode had the first appearance of Jake Lockley. In a scene with Harrow in the office “Marc” appears to be extremely aggravated and tries to kill Harrow. This seems like something Jake might do, but Marc would not.

The episode finishes with Marc and Steven unable to cross to the field of reeds or to the living world because their hearts are unbalanced. Because of this, the other unbalanced souls try to drag them off their ship and into the Duat forever.

When they come for Steven and Marc, Marc is the immediate protector telling Steven to hide, but in the end, they both end up protecting each other. It is not enough, as the unbalanced souls grab Steven and drag him into the Duat where his soul will remain unbalanced forever.

Marc remains on the ship to hear Steven’s last word be his name, see the scales balance, and to stride peacefully into the field of reeds.

That is what makes this episode so heartbreaking. Marc and Steven have spent their whole lives protecting each other, knowingly or unknowingly, and in the end, they have been separated for good. Where will the finale take this idea? I have no idea, but I am hoping from the bottom of my heart they reconnect.

To wrap up, here are this week’s five points to take with you into the finale.