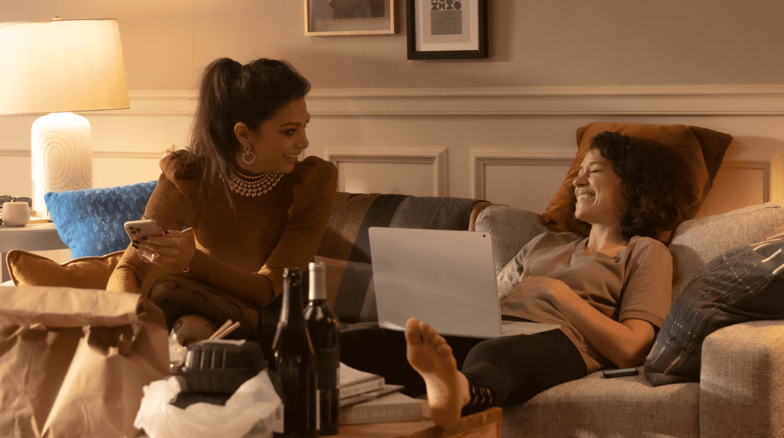 Jennifer and her friend Nikki look for a job for Jennifer. This episode focuses on balancing Jennifer’s career and her new place as a hulk.

Following the debut of She-Hulk in the public eye in the first episode’s ending, Episode 2 focuses on Jennifer’s response to immediate fame.

Jennifer actively wants to avoid being in her hulk form, but due to its popularity, she is pushed into being She-Hulk more and Jennifer less.

However, this increase in popularity results in the loss of her job at her firm. This leads to Jennifer being in a depressed state that comes to a peak at her family dinner when everyone there talks about the loss of her job and her new status as a superhero – the two things she does not want to talk about.

There is a silver lining to this fame, however, as Holden Halliway hires Jennifer as the face of the superhuman law division at GLK&H. Her employment has one catch: she has to be in She-Hulk form.

Her first case is one with a history tied to her family, as her client is Emil Blonsky, a.k.a. the Abomination, last seen in “Shang-Chi and the Legend of the Ten Rings.” After footage of Blonsky outside of his cell is released, Jennifer is put into a tough spot that she will need to find a way out of in the next episode.

Episode 2 focuses much more on the legal aspect of the character compared to Episode 1. While Episode 1 was more action-focused and showcased the strength of She-Hulk, Episode 2 is slower and more character-driven.

A big difference between episodes is the dynamics each focuses on. Episode 1 shows the relationship that Bruce and Jennifer have while Episode 2 is about how Jennifer acts in the workplace. These differences show that this show can have a variety of different kinds of episodes.

A big part of the episode is the return of the Abomination. Emil Blonsky made his MCU debut in 2008’s “The Incredible Hulk,” where he was the main villain.

Blonsky was a member of the British Royal Marine who was injected with imperfect super-serum and the blood of Bruce Banner on a mission to take down the Hulk. This power made Blonsky lose control of himself and go on a rampage through Harlem where Bruce defeats him. Since then, it is said that Bruce has forgiven him and they have moved past the fighting.

A question that can be asked after finishing this episode is what is Holliway planning? He puts Jennifer on a case that she has a familial tie to and states that he only wants her because she is a hulk.

A few things to keep in mind for next week’s episode: