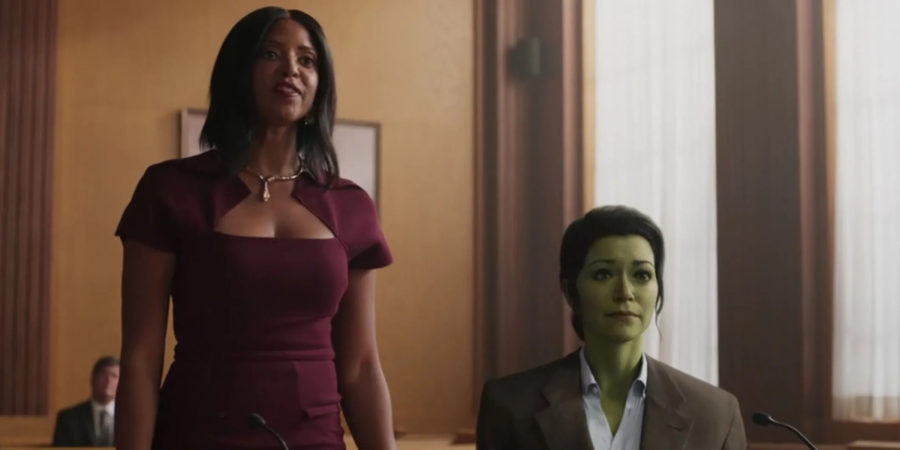 She-Hulk and her lawyer, Mallory Book, in court. This Episode focuses on how Jennifer is embracing herself as the She-Hulk, but also introduces the further expansion of the MCU.

Following the last episode’s cliffhanger, Episode 5 highlights how Jennifer is beginning to embrace the She-Hulk persona.

After being released from prison, Titania capitalizes on Jennifer’s new persona and releases multiple beauty products named “She-Hulk.” She also sues Jennifer over her usage of the name.

After meeting with Halliway, Jennifer decides to counter-sue, with the help of her co-worker Mallory Book. Due to the media giving the pseudonym She-Hulk, Book makes the case that Titania is only using the name for the goodwill associated with it.

However, because evidence of Jennifer rejecting the name is used by Titania’s lawyer, Book has to show that Jennifer uses the name in her personal life.

The evidence that shows this is Jennifer’s dating profile from Episode 4. With her previous dates as witnesses, Jennifer shows that she has accepted herself as She-Hulk and wins the case. Titania leaves the courtroom after promising that the rivalry between her and Jennifer is not over.

During this episode, we see that the superhero world has expanded, with the introduction of a tailor for heroes, Luke Jacobson. Jacobson creates suits for heroes based on their powers or weapons, Making them to the highest combat standards. This shows that more and more superheroes have been appearing, expanding the MCU.

A big part of this episode is Jennifer enjoying the She-Hulk persona and its benefits. She states that she likes her appearance and no longer being scared to be out at night. This presents a contrast against Jennifer’s thoughts in the first episode and shows how much she has developed since then.

The ending of this episode teases the return of Matt Murdock, a.k.a. Daredevil. Last seen in “Spider-Man: No Way Home,” Murdock is a defense attorney who fights crime located in Hell’s Kitchen in New York, but why is Murdock in Los Angeles?

A few things to keep in mind for next week’s episode: