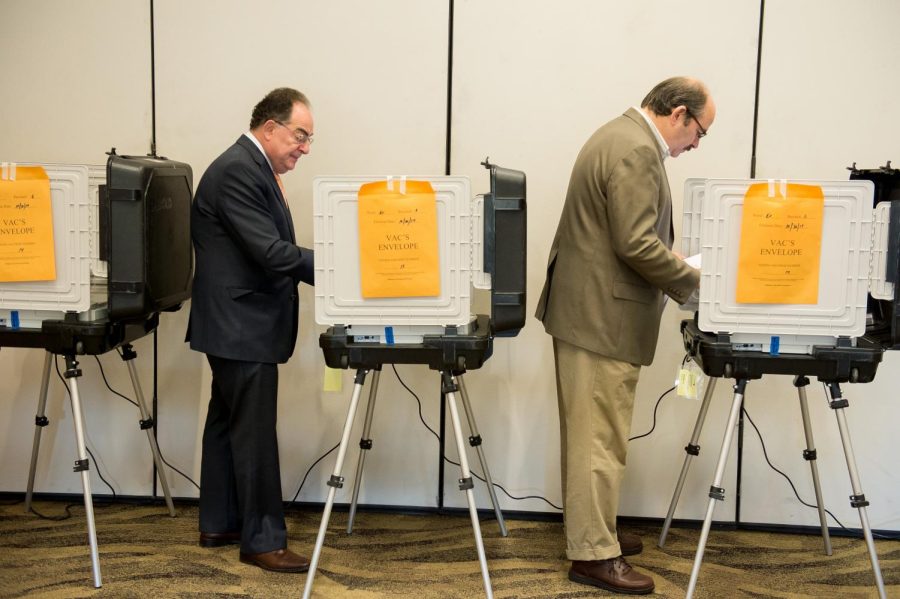 Two citizens voting during an election. Discussion of what the legal age should be in order to vote has been argued over for as long as democracy has existed. (Photo via Flickr (Maryland GovPics))

Two citizens voting during an election. Discussion of what the legal age should be in order to vote has been argued over for as long as democracy has existed.

The age citizens should be able to vote has been a question all democracies at one point or another have had to struggle with. In the United States, the voting age has been set to 18, but there are a myriad of differing viewpoints on what it should be set to instead.  Staff Writers Ashton Lewandowski and Drew McCarthy go “Head 2 Head” and discuss their respective stance on this topic.

Voting age should be lowered

Oppression is the exercising of authority to force people to do something they do not want to do. Teenagers arguably come the closest out of any group in America to meeting the qualifications for being labeled as oppressed.

[T]eenagers should have the rights entitled to them as American citizens.”

Deadpanning aside, teenagers under the age of 18, regardless of raw intelligence or maturity, are subject to being ordered around by their parents, teachers, and other positions of authority, with almost no say in the matter. While some obedience is healthy, teenagers should have the rights entitled to them as American citizens.

“No taxation without representation” is a core belief that Americans hold close to their hearts. It was a catchy slogan created in response to the injustices perpetrated by the British Empire against its American colonies. America was founded on this notion, but it is being ignored in regards to teenagers.

Anyone 14 and over can have a job and be taxed for the income they make, despite having no way to vote for representation. This is a violation of the previous notion of self representation through voting. If someone is working and being taxed from that work, they should be able to vote.

Teenagers are also majorly affected by political decisions. They are heavily affected by substance abuse, mental illness, and other issues like the aforementioned taxes which are directly related to government legislation.

The COVID-19 pandemic highlighted this fact tremendously. Students had to bear the consequences of their schools “anti-Covid” measures, or lack thereof, regardless of what the actual student body desired. It is a sad fact that students do not have a say over who is elected to their own school boards when they will be the ones impacted the most by their policies.

The best way to learn about democracy is by taking part in it. ”

Besides being personally affected by decisions of elected officials, voting could be a good way for teenagers to safely engage with the political process. The best way to learn about democracy is by taking part in it.

Just like learning how to drive a car, teenagers need to learn how to vote. Since teenagers would still be protected by their parents, most decisions would not affect them as heavily.  They would be able to safely partake in and experience the consequences of the ballot they cast. Students would be more engaged with their current events classes as they would have a stake in it. Their vote could change the world.

Teenagers should have the ability to cast a ballot. Voting is not only a right that should be entitled to them, but the educational benefits are limitless. The voting age needs to be lowered to better represent American values.

Voting age should be increased

In a world where the government controls most things in one’s life, voting is very important. Because we are putting people in charge of our lives, we should also try to research what they plan on doing with that power. It is important that we choose the very best candidate that we see fit.

It is often a struggle to get people to simply research the candidate they want to vote for.”

Going about figuring the best candidate is an option some people do not take. They hear about who their friend thinks is the best candidate and just go with that. It is often a struggle to get people to simply research the candidate they want to vote for.

This can all stem from one thing: immaturity. The current legal voting age is 18 in America. Although that age is legally the best option because of requirements in the Constitution, it is not the best in practice. More and more young people are voting, which is in some ways problematic.

At 18 years old, one is getting nearer to that plateau of maturity. Humans do not reach full maturity until 25 years old. This means that tons of immature people are voting in elections each year.

Even if we disregard maturity, as one grows older, unless prohibited by a disability, it is impossible to not learn more information. Everyday the brain constantly takes in information. Any arbitrary age could replace the current voting age. However, with every day one receives information, the more apt that person is to vote.

Older age often correlates with a larger bank of wisdom.”

Twenty-five happens to be an age where most individuals who have gone to college have graduated. College increases many statistics relating to intelligence and knowledge-based skills. This could be a vital factor in bringing the utmost potential out of American politics.

This means that although 25 would be a prime age to increase the voting age to, any amount of time helps due to how much information one can receive. This would surely be beneficial to America as more educated individuals will be able to participate in significant political action.

An increase in the voter age would boost the average intelligence of the voter base and would therefore better the political decisions affecting America. Older age often correlates with a larger bank of wisdom.

With a slight increase in legal voting age, a fair amount of change could be injected into the political world. Creating a healthy environment in which educated and mature individuals can express their right to vote and affect America’s well-being for the better.