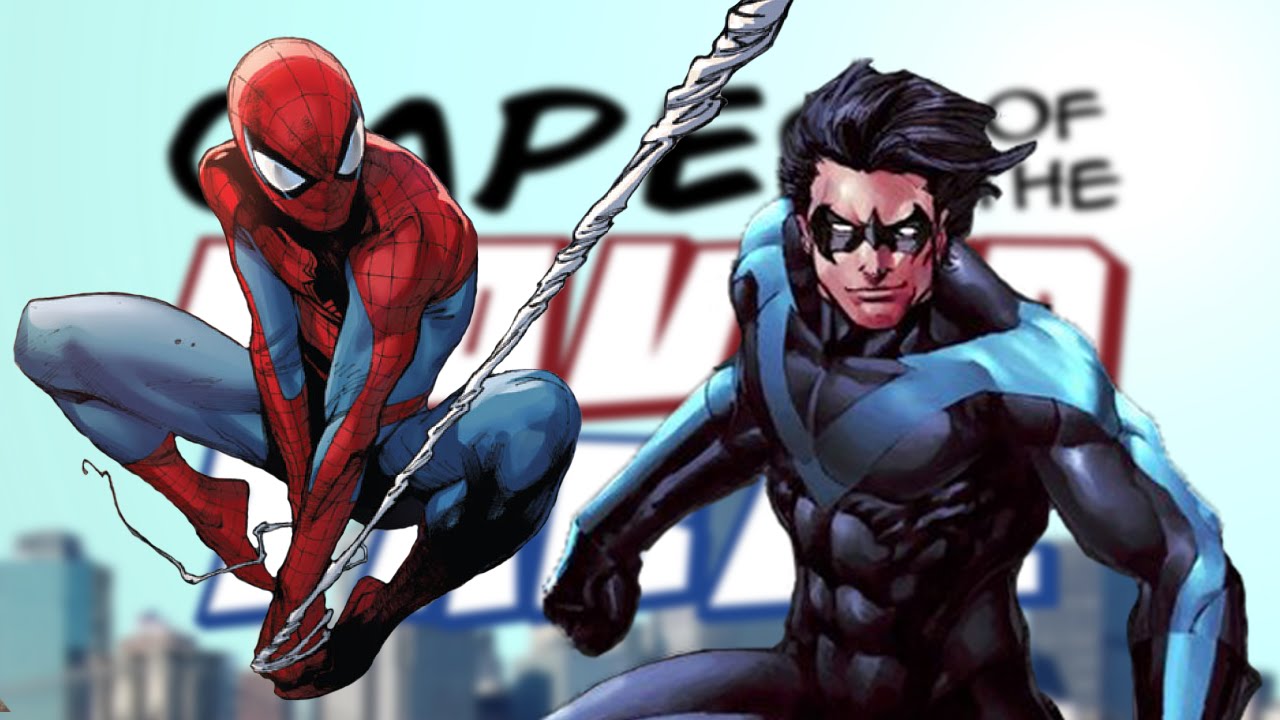 Image of Spider-Man and Robin (a.k.a. Nightwing), two great superheroes from different comic brands. D.C. fans admire Robin’s individuality and consider him the better hero while Marvel fans would argue Spider-Man is better due to his relatable character and fan-favorite movies. (Photo via YouTube (Justin Bellman))

Image of Spider-Man and Robin (a.k.a. Nightwing), two great superheroes from different comic brands. D.C. fans admire Robin’s individuality and consider him the better hero while Marvel fans would argue Spider-Man is better due to his relatable character and fan-favorite movies.

Marvel versus D.C. is a heated topic among action fans. This week’s “Head 2 Head” is another D.C.-Marvel discussion. Staff Writers Katie Johnson and Bella Gorman argue about their personal preferences on who is a better superhero, Robin or Spider-Man.

The Amazing Spider-Man saves the day

You have been waiting since Monday for this. It is finally the weekend, and you get to watch the new Spider-Man movie with a group of friends or family. After about two hours, you leave the theater with delight, chatting about the cliff-hanger ending. Sound familiar? Well, duh, of course it does!

From his character to his movies, there are endless reasons why Spider-Man is the best superhero.”

What is not to love about Spider-Man? From his character to his movies, there are endless reasons why Spider-Man is the best superhero.

The Spider-Man movies are extremely popular and suitable for all ages. There are nine movies total, including the animated “Spider-Man: Into the Spider-Verse,” where Spider-Man is played by four different actors.

Fans tend to argue who the “best” Spider-Man is, as the films are quite popular. In fact, the most recent movie, “Spider-Man: No Way Home” was the second top-grossing movie in 2022 and incorporates a crossover of the Spider-Man actors including Toby McGuire, Andrew Garfield, and Tom Holland. How can you beat that?

Relatability also plays into the admiration fans have for this teen superhero. Spider-Man is an average high school boy who deals with normal conflicts, including homework, bullying, and girls. The only difference between him and us is his powers. Throughout the series, Peter Parker, Spider-Man’s human name, navigates growing up as he develops into a young man.

There cannot be a superhero without tragedy. Similar to many other fictional characters, both of Peter Parker’s parents died in a crash when he was young. As if this was not enough death for the series, his uncle dies before his eyes as well, and in “Spider-Man: No Way Home,” so does his aunt. These misfortunes make Spider-Man stronger and more impressive to the fans.

Who else would the best superhero be besides Spider-Man? He is a fan favorite for his relatability, strength, and action-packed movies.

Other superheroes cannot beat him. He is your friendly neighborhood Spider-Man!

Have you ever wondered what Robin means? Robin means rebirth, renewal, and hope. Those are all qualities that Robin poses as a superhero.

Robin became a superhero at the age of twelve when he became Batman’s sidekick.

Robin was created for revenge, but when he found his first villain, he realized that he wanted to prevent other people from experiencing the same thing he did.”

The original Robin is Dick Grayson who first appeared in issue #38 of The Detective Comics. Grayson was from a family of circus performers who died one night when Tony Zucco had messed with the ropes.

A grieving Grayson promised to track down the man who caused the death of his parents.

Robin was created for revenge, but when he found his first villain, he realized that he wanted to prevent other people from experiencing the same thing he did. He became a sidekick to help stop crime.

One reason Robin is the better superhero is that he creates his own team twice.

Robin leaves Batman after five years to create the Teen Titans in Jump City with his new teammates Starfire, an alien princess, Beastboy, Cyborg, and Raven, a half-demon. Over the next three years, they work well together defeating Brother Blood, The Hive-five, and other villains along the way.

After the Teen Titans, he then creates the Young Justice team for young teen superheroes to help protect the world when the Justice League cannot.

As well as branching out from being under Batman, he wants to be his own person, without the use of someone else’s technology. As a Teen Titan, he creates technology and weapons for Cyborg.

Robin had lived under the shadow of Batman for years and he wanted to prove to everyone, including Bruce, that he was capable of taking care of things. That leads him to change his name to Nightwing and have his main city being Bludhaven.

Unlike other heroes who do not have a balance between hero life and work life, Robin is able to protect the ones he cares for without having to reveal who he is under the mask. He is able to maintain a relationship with someone, such as Barbra Gordon, before and after she is Batgirl.

Robin is a much more emotionally mature superhero and well-adjusted protector without getting too emotionally evolved in rescue missions or fighting the main arch-villain.

Robin will always be there for people in trouble. After all, he is the Boy Wonder!