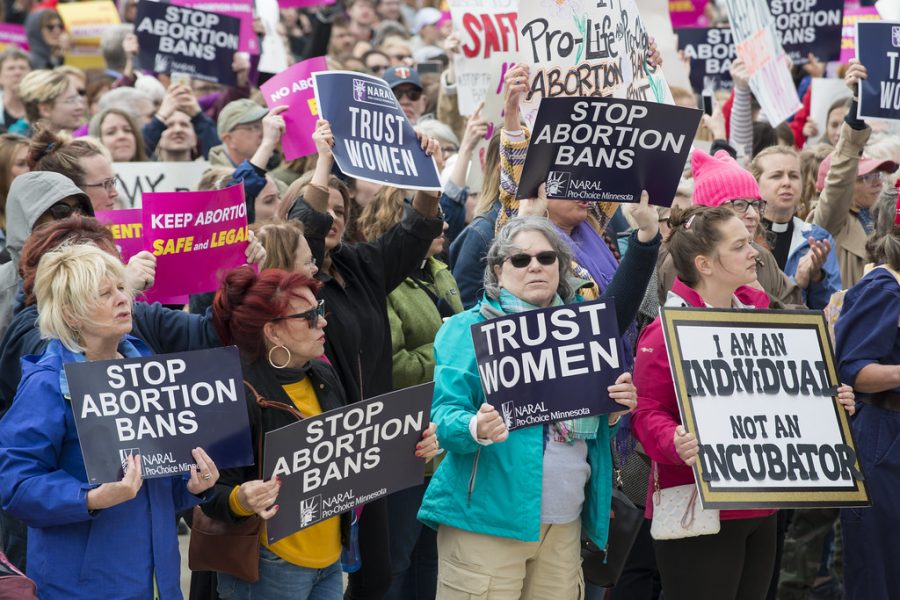 Recent decisions about Abortion have sparked new opinions on this long-standing controversy. Some people are pro-life because they see abortion as ending a life, while others think it is the woman’s decision to keep carrying the child or not. (Photo via Flickr (Fibonacci Blue) under Creative Commons license)

Recent decisions about Abortion have sparked new opinions on this long-standing controversy. Some people are pro-life because they see abortion as ending a life, while others think it is the woman’s decision to keep carrying the child or not.

The long-standing controversy over the legality of abortion is a debate that still rages today. Staff Writers Katie Johnson and Cecily Shaber provide their opinions on pro-life and pro-choice.

Every person has a fundamental, undeniable, and bottom-line right to live. In general, this is a truth that people agree on. Actually, one would be hard-pressed to find a person who believes there are people who should be denied the privilege of life. However, this truth is often dishonored and altogether ignored when the topic of abortion comes into play.

[N]o person shall be deprived of life, liberty, or property, but this fact is not reflected in the nation’s abortion laws.”

According to the U.S. Constitution, no person shall be deprived of life, liberty, or property, but this fact is not reflected in the nation’s abortion laws.

The popular pro-choice argument “my body, my choice” is not applicable because from the moment of conception, a woman’s body becomes the vessel of another human being.

A person is a person, beginning at conception. There is no identifiable point in a fetus’ life at which it suddenly becomes a person who holds the same right to life as you or I. Instead, human life is exactly that beginning at the moment of conception.

At conception, half the DNA comes from the egg and half from the sperm, to form the zygote, the beginning of a new human life.

This zygote now has a unique set of DNA possessed by nobody else, causing the zygote to be its own human person, separate from the mother. Abortion is not a choice made in regards to one’s own body. Rather, it is the decision to take the life of the person your body is hosting.

A heartbeat does not constitute the existence of a human person in the womb. It is merely another milestone in the biological development of a person.

Nor does the fetus become a person only after a certain length of time. With the rationale that a fetus becomes a person after nine weeks, for example, then what is the fetus 30 seconds before that duration is reached? There is no switch that is flipped to “activate” the fetus’ personhood, and this is to reiterate that personhood is established at conception.

Considering that a fetus is a person from the moment of conception, then abortion really is a first-degree murder that needs to be classified as such. The legal definition of a first-degree murder is one that has been premeditated. By making the decision and scheduling an appointment ahead of time for an abortion, the operation falls into this category. Murder is illegal, and abortion is murder. Therefore, abortion demands illegality.

The conditions one is born into do not determine the value of his or her life.”

In attempts to justify abortion, many call to mind the cases in which the child is going to be born into unfortunate or burdensome circumstances. These may include parents who are ill-equipped to care for the child, poverty, genetic abnormalities, or having to be placed for adoption. Here, we must recall that it is not the responsibility of anybody else to determine the value or potential of another’s life.

This does not, however, diminish the reality of a mother’s suffering. Unsought pregnancies cause significant hardship for mothers, especially in the rare, legitimate, cases of pregnancies resulting from rape, or pregnancies that jeopardize the mother’s health.

I sympathize with all those who have endured the unimaginable strife, abandonment, or even shame that may accompany an unplanned pregnancy. Still, no amount of suffering, no matter how severe, trumps a person’s right to life. A pregnant mother is gifted with the life of another human being and is obligated to offer that person the best possible life.

Life is a gift that every person is entitled to, but unborn children are not capable of defending themselves. Accordingly, our society has a responsibility to safeguard the lives of the vulnerable, and this needs to be reflected in the laws we have in place.

More than just choosing to terminate

Everyone has the right to choose what they what to do with their own body, be it carrying a child or having an abortion.

The moment a child is conceived in the womb is the moment the mother has the right to have an abortion. ”

The moment a child is conceived in the womb is the moment the mother has the right to have an abortion.

Many people are against having an abortion due to it terminates a life. What many people do not understand is the reason behind the choice of ending the pregnancy.

Most women who seek an abortion usually have multiple reasons why abortion is the right choice. These reasons could be financial, the timing of the child’s arrival, or an inability to properly care for or support an additional life.

In a study done by BMC Women’s Health, many women stated that if they had continued on with the pregnancy they would have struggled with money. Some are already living paycheck to paycheck.

This also includes not wanting to rely on the government for support, which only creates additional burdens for the taxpayers.”

They do not want to depend on others to help take care of the child. This also includes not wanting to rely on the government for support, which only creates additional burdens for the taxpayers.

Another reason is it not being the right time to have a child. Most women who have a baby are young enough to be in college or looking for a well-paying job and do not have the means to start a family early. Some young mothers who have children already feel like they are struggling to find enough money to take care of their everyday needs already.

One in five women reported that they chose to have an abortion because they felt a baby at the time would interfere with their future goals and opportunities in general, or, more specifically, with school or career plans. Others would want to find a job and have a stable career before having a child.

While most women want children, many think they are emotionally or mentally unprepared to raise a child. Many people do not understand how a woman has to be in the right mind to be able to take care of the child she is carrying, by doing regular checkups, eating healthy, having prenatal care, and being able to take care of herself and not get stressed out.

Many women also choose to have an abortion due to health related issues, including concerns for the survival of the fetus and even the mother.

While many people are not for the choice of abortion, they need to understand that the choice is more than just terminating a pregnancy.