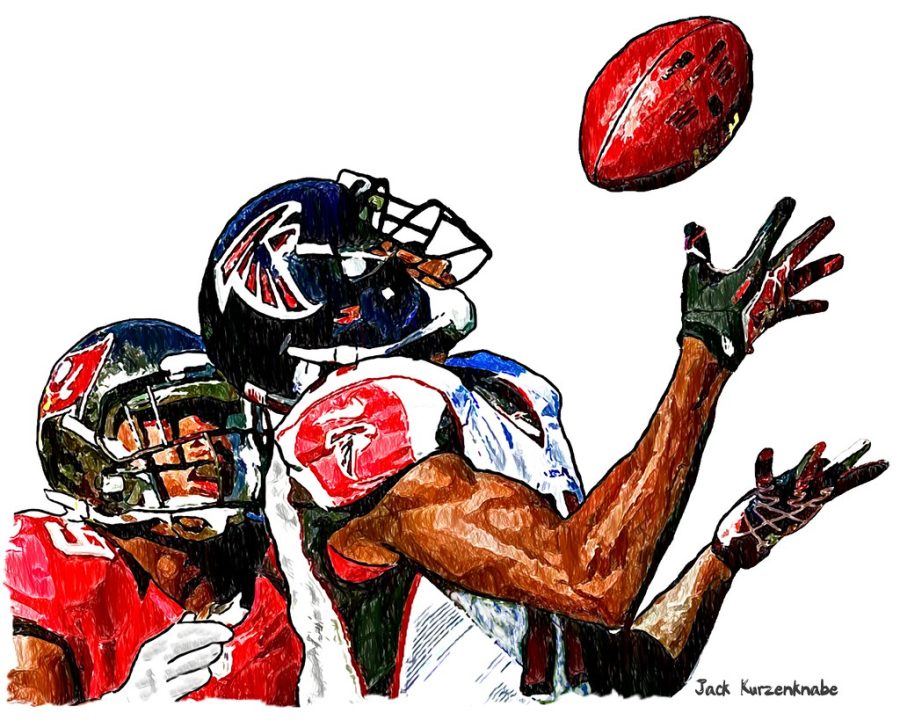 Falcons player catches ball with Buccaneer player close behind. Micah Freeman and Drew Mccarthy debate who is better, the Atlanta Falcons or the Tampa Bay Buccaneers.

With the NFL pre-season ending, futures are looking bright for some teams, and not so much for others. Prowler Editor Drew McCarthy and Staff Writer Micah Freeman debate who the better team is, the Atlanta Falcons or the Tampa Bay Buccaneers.

Before any arguments are made — Yes, I ride the bandwagon. Not only that but I do not follow football as much as most football fans. However, I am not ignorant to the success of football teams. Even then it is obvious to even the most uninformed football fans that the Buccaneers are better than the Falcons.

Let’s start with last season’s record and other important events in the past. The 2021-22 season Buccaneers ended with a 13-4 record. The Falcons fell behind with a 7-10 record, a record not even good enough to make the playoffs, let alone contend for a championship.

Both teams have been to the Super Bowl twice, but the only difference is the Buccaneers have won both times.”

Presently, the pre-season is going on so it is not defined who is doing better in the current season. However, through predictions we can figure out who is more likely to win. It is predicted that the Bucs next season will end with a 14-3 record, and include defeating the Falcons twice.

Another source predicts the NFC win totals for the 2022-23 season. Based off of win totals, they not only have the Buccaneers as the Division Champions but they have the Falcons finishing last in the NFC South. Sources claim that the Bucs will win at least 11 games, while the Falcons will only manage five wins.

With a closer at the team themselves, the Buccaneer offensive line has a clear advantage. According to OL analyst Brandon Thorn, the Buccaneers have a “Top 5 caliber line” this season. The same thing cannot be said for the Falcons.

There is no contest at the quarterback position. Tom Brady came out of retirement due to “unfinished business” and has decided to lead the Bucs once again. Tom Brady is the best quarterback of all time. It would be hard to be bad with a quarterback like Tom Brady.

The Bucs have also beefed up the defensive line. Former Bears DL Akiem Hicks and veteran DL Deadrin Senat have been added to make the Bucs a “tough out” to score against.

Although there are a lot of factors as to what makes a team good, the Bucs skilled roster seals the deal. The Falcons would have no chance of beating them now or in the future.

I am a big Falcons fan. I have been my whole life. Yes, there have been times when it has been hard to root for them, but nothing will stop me from being a fan of the team. This season, the Falcons have the potential to overcome the Buccaneers and cement themselves as the better team.

While last season was rather disappointing, it was still an improvement from the year before where the Falcons had a 4-12 record. This shows with this new coaching staff, the Falcons have grown so the stats from last year, while important, do not reflect this current team.

This season, the Falcons have the potential to overcome the Buccaneers and cement themselves as the better team.”

However, if you wish to talk about accomplishments made in the past, the Falcons have made it to the playoffs a total of 24 times to the Buccaneers’ 12 times. They also have a total of eight Hall of Famers while the Buccaneers only have seven.

While we could sit here and discuss the predictions for this upcoming season, that does not matter as those predictions can be biased and do not end up being right a lot of the time. What matters is who is on the team.

Former Tennessee Titan Marcus Mariota is the new QB for the Falcons this season. In his first game against the Buccaneers, Mariota threw a 52-yard pass that led to a touchdown. By the end of his first game, he threw four touchdowns in a 42-14 win.

Despite people doubting them and the struggles along the way, the Falcons are a great team. They can and will overcome the Buccaneers.