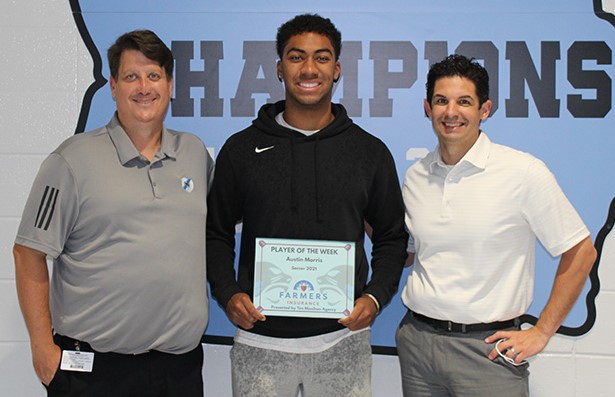 Tim Monihan and Farmers Insurance recognize senior Austin Morris as the 13th Player of the Week for the 2021 spring sports season.

“The Starr’s Mill soccer program means a lot to me,” Morris said. “I made a lot of good friends and a lot of good memories I’ll never forget.”

Morris was nominated for the Preseason All State team, as well as being First Team All Region, and earning a spot on the AAAAA All Star team.

“Austin has been one a fantastic player and a fantastic leader for us all year,” head coach Aaron Buck said. “He has been somebody that had been invaluable to our team just with his great play as a defender and with his leadership, and he lived up to all the qualities that we hope for.”

Morris played 17 games this season. He ended the season with a total of three points, scoring a goal against Chattahoochee High School in a scrimmage on January 29, and assisting a goal on March 19 in the team’s 10-0 win over Northside.

“Our goals are to win a state title every year and we didn’t get there, but the positive is that the boys had an unbelievable year. 18-1-1 is a fantastic year that really compares them with some of the best programs in our school’s history,” Buck said. “So for that I’m proud, just disappointed that we didn’t get to our final goal.”

Starr’s Mill lost in the quarterfinals of the GHSA state playoffs to Johnson (Gainesville) 2-1.The Panthers ended the season 18-1-1 overall, 6-0 in region. The boys team currently ranks 2nd in the nation and 10th in the state.